Phoenix -- Arizona Attorney General Mark Brnovich announced today the arrests and indictments of 48- year- old Susan Marie Rall and her husband 60- year- old David Jerome Rall. The couple is accused of embezzling approximately $34,000 from the state during Susan Rall’s time as an employee of the Arizona Department of Environmental Quality (ADEQ). The couple was charged with seven felony counts including Conspiracy, Fraudulent Schemes and Artifices, Theft, Money Laundering, Illegally Conducting an Enterprise, Attempted Theft and Forgery.

Attorney General Brnovich Reminds Arizonans of the Do Not Call Registry

Phoenix -- Telemarketing is a multi-million dollar business that affects all of us. Arizona Attorney General Mark Brnovich wants to point out that one of the best ways to reduce the number of unwanted and unsolicited phone calls is to sign up for the free National Do Not Call Registry. The National Do Not Call Registry protects residential and cell phone numbers. The registry is managed by the Federal Trade Commission (FTC) and enforced by the Federal Trade Commission and the Federal Communications Commission (FCC). 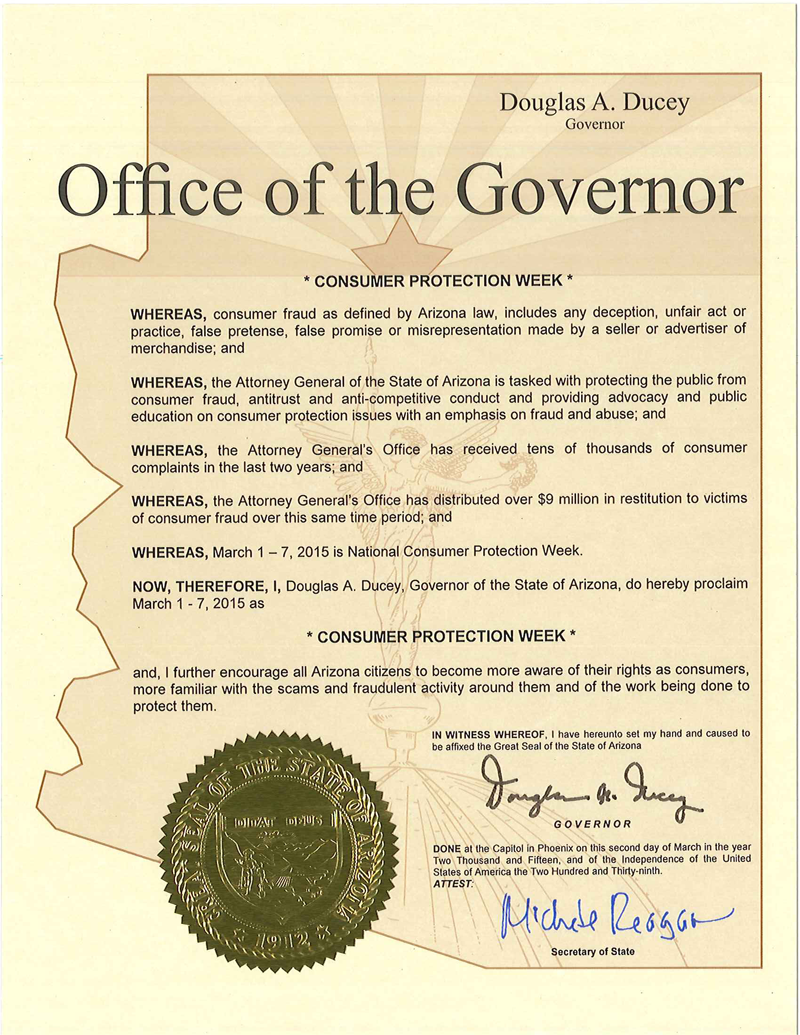 Phoenix -- Attorney General Mark Brnovich is warning Arizonans about a widespread foreign lottery scheme. Victims continue to receive unsolicited contact informing them that they have won millions of dollars in another country’s lottery but that they need to pay a fee to claim their prize. Victims send money, but never receive winnings.

(Phoenix, AZ) -- Arizona Attorney General Mark Brnovich announced the filing of a consumer fraud lawsuit against Advantage Foreclosure LLC (Advantage) and its owners Matthew and Lynette Van Remoortel. Advantage is an Arizona based company that advertised on the internet site located at aboutmyforeclosure.com and purports to provide foreclosure consulting services nationwide.

“Scam artists use this stressful time of year to try to get their hands on your money and exploit your personal information,” said Attorney General Mark Brnovich. “I want consumers to be aware of the risks of falling for a tax scam this time of year."

Phoenix -- Attorney General Mark Brnovich announced today the sentencing's of Indrani Gaston of Coconino County and Pamela J. Williams of Cochise County. Both women were sentenced in separate cases after admitting to illegally using access to their victim’s finances for their own benefit.

Phoenix -- The Arizona Attorney General’s Office has released the top consumer fraud complaints for 2014 in recognition of National Consumer Protection Week (NCPW), March 1-7, 2015. NCPW is a coordinated nationwide campaign that encourages consumers to know their consumer rights and make better-informed purchasing decisions. Attorney General Mark Brnovich will also be providing consumer tips throughout the week to promote the cause.